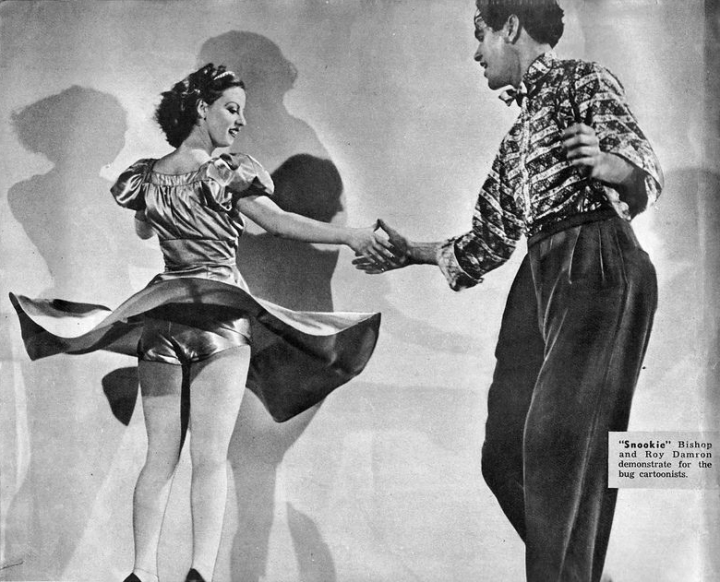 We were recently in touch with Roy Damron’s caretaker and learned of his death in early January, 2020.

In 2018, PSDF sent Bobby White to Roy’s home in Hawaii where he, assisted by Deb Eason, spent three days interviewing Roy extensively. For CalBal 2020, Roy and Snookie featured prominently in our marketing.

Here is Bobby’s obituary, cross-posted from his blog Swungover.

Roy was born in Los Angeles, California, on August 27, 1921. He grew up in the then-small town of Alhambra, where he attended Alhambra High School. Like many young people, he took basic dance lessons during that time, where he learned the box step. He would practice it while walking five miles home from the lessons with a friend, and they would occasionally stop to try out the step with each other. After Roy got into swing dancing, he would forever think of that box step as the fundamental basic of all the swing dances.

Roy fell in love with swing in the mid-30s, right at the beginning of its popularity in Los Angeles. He was soon so obsessed that he was dancing every night of the week, often twice a day on weekends. He would dance until 2 a.m., sleep for a couple of hours, and wake up to try to do homework before class. By his senior year, his principal had to ask him to stop dancing for a few months to make sure he could graduate. He was failing his classes because of all the dancing.

At his high school, the group of passionate swing dancers called themselves the Alhambra Alligator, and Roy was their president. They’d all pile into a friend’s car and drive to dances around the area. They’d go to any ballroom. If a dress code demanded ties, they’d take their socks off and tie them around their shirt collars. Roy was famous for his crazy shirts — his mother made them out of curtains. They didn’t last long, though. The fabric was not meant to be sweated through, and the colors would run. But he and his partners thought bright apparel was key to catching people’s eyes.

Roy took pride in his dancing. He didn’t like to call it “jitterbug” (he called it “swing”) and didn’t like to do “hokey” steps like the kind that were trendy among many competitors and film dancers in order to look wild or zany. He loved to go to Central Avenue — the “Little Harlem” of Los Angeles, as it was called. It was Los Angeles’s primary Black neighborhood, famous for its dance venues like Club Alabam. He loved dancing with the Black dancers and watching them dance, and his group would meet up with them at other dances around town. He recognized the role they had in dancing the Southern California swing dances like Balboa, “Swing,” Shag, and Lindy and the inspiration they gave him and other dancers.

Roy grew himself a name in the swing dancing community at the time. In 1939, when Roy was 17, Look magazine got in touch with him and his friends in order to do a photo shoot, which is where several of his famous pictures come from. (Modern SoCal swing dancer Beth Grover over at “V is for Vintage” did a fantastic spread of those pictures.) That same year, Roy attended a dance in the Santa Monica ballroom and got spotted by film studio scouts looking for swing dancers who knew what they were doing. Roy got put on the list as a studio swing dancer, and his life changed.

Despite being recognized by magazines and studio executives as a great swing dancer, Roy did not wholeheartedly agree. He always said his partners, like Snookie Bishop, were the real dancers worth watching — he just happened to be holding their hands. Here is a video of Roy and Snookie dancing for a few seconds in one of the Los Angeles contests that was so big it had to be held in a stadium. (Special thanks to swing dance historian Peter Loggins for preserving this footage.)

The clip shows only a tiny bit of dancing, but it does include the move we call “The Damron,” which is commonly taught in Bal-Swing classes today. (Roy, for his part, didn’t remember that move.)  Indeed, for all the fantastic pictures there are of him, Roy spent very little time swing dancing in movies. He spent more of his time as a “stunt coordinator,” meaning he helped actors and filmmakers with swing-dancing related jobs, which soon widened into a bunch of other jobs. There are dozens of Southern California swing dance scenes on film, and Roy sadly is in only a few of them. In particular, he really got a kick out of being used to help create swing dancing bugs for a cartoon short called I’m Just a Jitterbug.

During World War II, Roy enlisted and was sent to work at the military post office in New York. By that time he was not swing dancing very much and did not go out social dancing. But he was curious enough to visit the Savoy Ballroom, which he did during the day. After the war, he started using his GI bill to take lessons in any kind of dance that would help him in films. He had perfect timing, because the golden age of Hollywood musicals was around the corner.

He was a backup dancer in many films, including Singing in the Rain. His teeth were so bright that when he’d smile on set Gene Kelly would tell him “Turn those things down.” He even got to relive his swing dancing days when he was cast in 1954’s Living It Up! (He’s the one in the zebra-print shirt.)

Roy would do any specialized extra work that came around, not just for a paycheck, but because he loved trying stuff out. One time there was a call for scuba divers, so Roy borrowed some scuba gear and taught himself how to use it in a pool overnight. The next day he was cast as a scuba diver. He ended up liking scuba diving so much that he trained and became a scuba instructor and in some small ways a pioneer in scuba.

Roy said he lived life in ten-year pieces. There were his ten years of swing dance, followed by ten years of professional dance, ten years of motorcycles (he supplied a real-life motorcycle gang for the 1953 film The Wild One), and then ten years of scuba diving (he was reportedly the first certified instructor in Hawaii). And throughout most of it, he brought his passions to the film industry — as a background dancer, motorcycle coordinator, scuba-diving actor, and various grizzled, salty characters in episodes of Hawaii Five-O. And after he retired from film, there were the ten years of giving educational talks about Hawaii’s water supply, because Roy had become a passionate ecologist.

Now, something personal. In 2018, Pacific Swing Dance Foundation sent me to Hawaii, where Roy lived, to interview him. Hawaiin swing dancer and Balboa enthusiasts Deb Eason assisted me as, over three days and nine hours of interviews, we got an amazing, vivid view of what it was like to be a swing dancer in Southern California’s swing era. Not only that, Roy walked me through 96 years in the life of one of the most amazing people I have ever met.

Roy was incredibly progressive, especially having come from his time and place. He had a fantastic attitude about everything, a very open mind, and would grow a smile on his face when reliving his memories. He would always beam, laugh, and say, “It was wonderful!” After the first day of interviews during which he wore pants, we did the next two with him wearing only a sarong. This is the kind of guy Roy was: He and his wife had become nudists when they had helped out a nudist group with scuba diving. He said the first day of interviews was the first time he had put on pants in months. I took it as a compliment that he very quickly took them back off. During the entire time I interviewed him, he wore his Swing Dance Hall of Fame medal around his neck.

At his house, outside near the pool that he used to teach diving, he had built a pavilion.  Beneath it, I ran my hands over the bar and my bare feet over the outside dance floor he had also built. The bar had a glass top, and underneath he displayed a variety of things he had found during his dives. He seemed to have lived three lives to the fullest.

Since my interview in 2018, I’d call him every few months. He spent his last year patiently waiting for the end. His back made it hard for him to stand, and his voice made it hard for him to talk, so he’d spend most of the day sitting in a chair, listening to classical music or watching Dodgers games, and enjoying the Hawaiian breeze move through the home he had built. I can say without a doubt that he had greatly enjoyed his life and was ready to move on.

Huge thanks to Chelsea Lee (editor extraordinaire!), Deb Eason, and a huge, huge, huge thanks to the Pacific Swing Dance Foundation for their dedication to preserving the history of the dance — and, on a personal note, giving me the opportunity to spend three days with such a pioneer of Southern California swing dances and incredible person.

Although our 501(c)(3) status is pending, you can still make a financial donation. Your donation will go into our general fund to help defray operational expenses and fund new projects such as collecting additional oral histories from original dancers, acquiring collections and memorabilia, and preserving and making items in the existing collection available to the public through digitization. Donors who provide their e-mail addresses will receive quarterly updates on new and ongoing projects.